Mandarins are little bursts of sunshine that appear during the chilly winter months and keep on shining through spring, just before the fruits of summer start to appear.

I make this easier-than-ever marmalade recipe every year, often for holiday gifts. The recipients of the homemade goodness always ask for more, so I usually make another batch in the spring. I’m sharing the recipe here so friends can pass on the marmalade love to more friends. 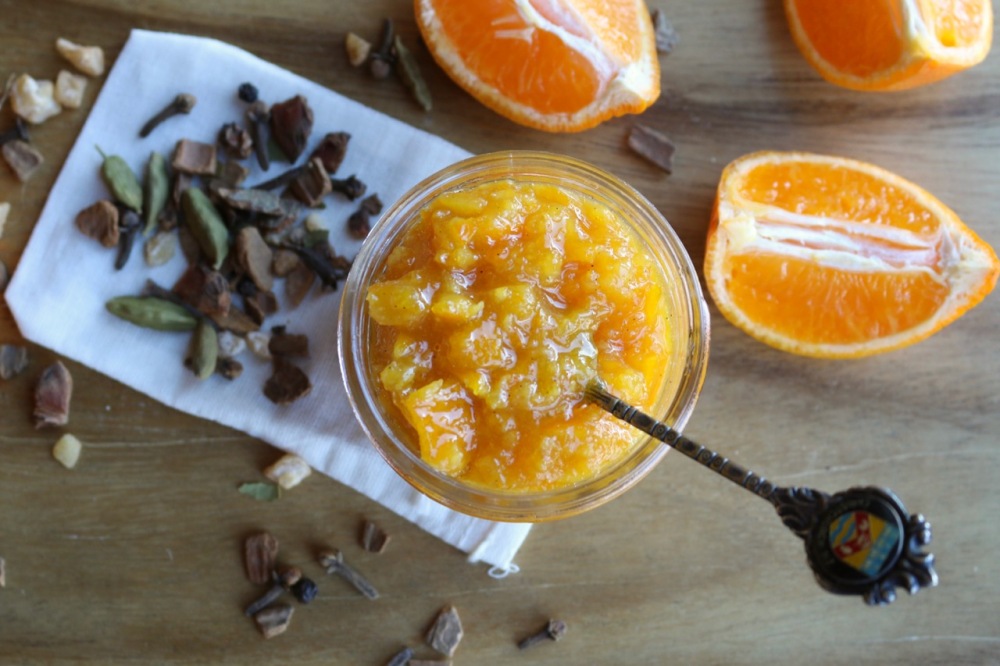 I adapted the recipe from one of my favorite cookbooks about canning called Preserve It! by Lynda Brown. The book includes beginner-level preserving recipes and tips that make the whole concept of canning approachable for an impatient newbie like myself. 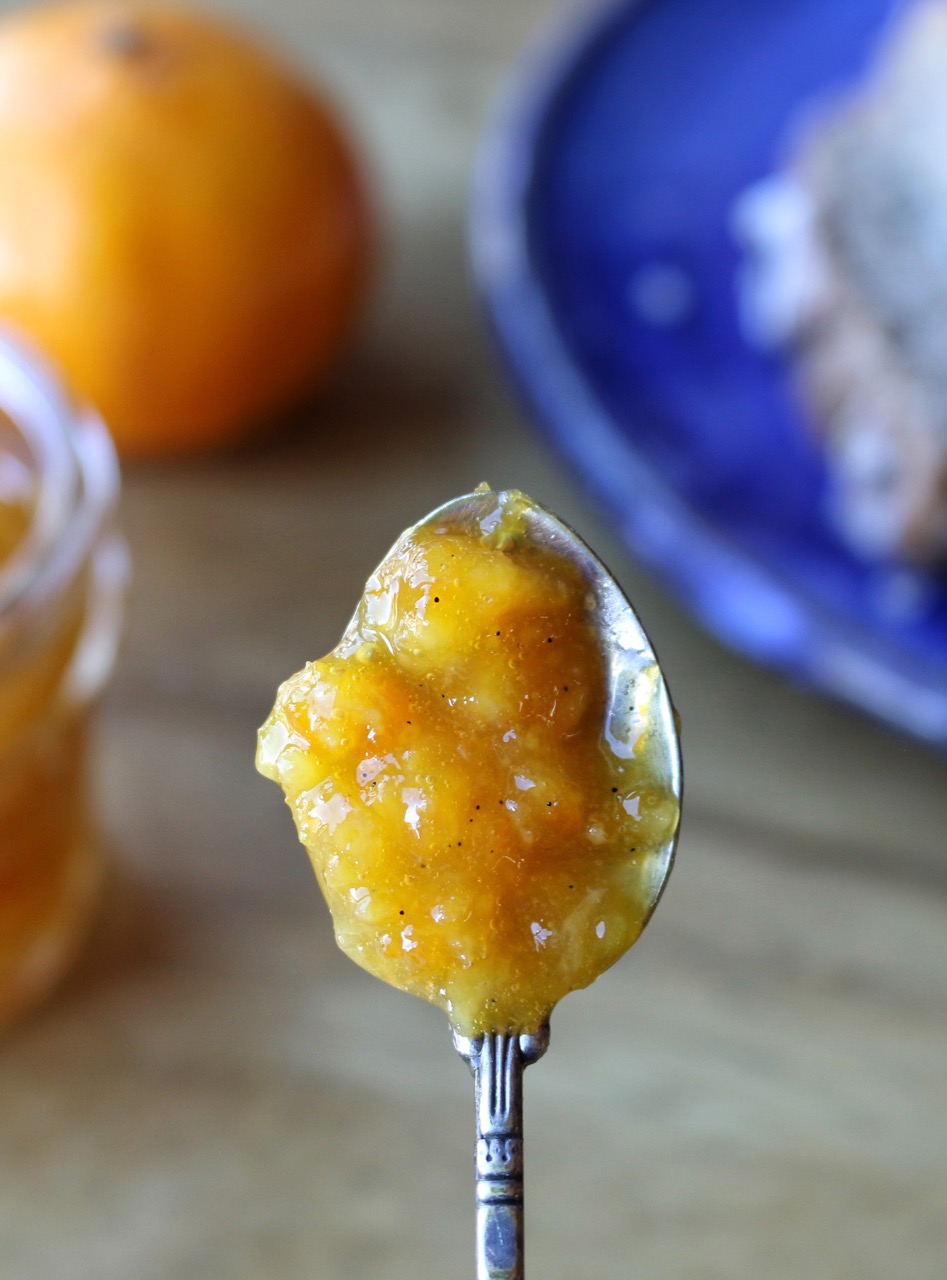 The original recipe calls for clementines (a variety of mandarin) and a splash of whiskey. I’ve made the original many times and it’s perfectly delicious. But I often mix it up and infuse the marmalade with rooibos or an herbal chai. If you don’t have whiskey on hand you can make do with brandy or dark rum. I also like to scrape vanilla bean seeds into the mixture.

For a holiday twist, I infuse the marmalade with Savory Spice Shop’s mulling spices, a combination of whole spices like cinnamon, allspice, cloves, mace, and cardamom seeds. The mulling spices add just a hint of spice to complement the sweetness and brightness of the orange flavor.

In an updated version of the recipe (December 2018) I added a method to simmer apples and lemons in water to make your own super-easy pectin concoction. 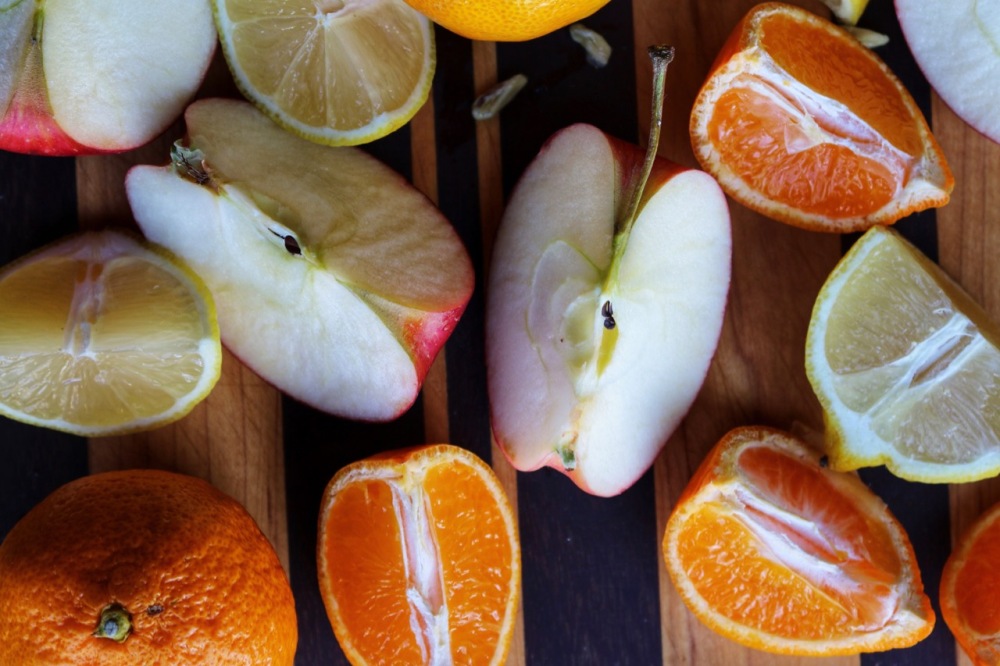 Why pectin? In my experience making this marmalade so many times, the setting point (when the marmalade thickens) varies wildly, from 30 minutes to up to 2 hours. I think this has to do with the variety of mandarin/clementine I use each time. The problem, however, is when you simmer mandarins in sugar for up to 2 hours they start to harden to an almost candy-like consistency. That’s no good for a marmalade; you want it to be soft not chewy. The homemade pectin is totally optional, but I find it helps get the marmalade to a setting point faster, making the whole project go quicker.

This is absolutely my favorite way to make marmalade, and it has become an annual winter preserving project at my house.

Adapted by Suzanne Klein, Tea Foodie from the Clementine Whiskey Marmalade recipe in Preserve It! by Lynda Brown.

Juice and seeds of 1 lemon

2 1/2 pounds mandarins or clementines (any variety)

Muslin bag (or cheesecloth and twine)

1. Cut apples into eighths and toss them—skin, seeds, stems and all—into a small saucepan. Add the juice and seeds of the lemon. Pour water over top and bring to a boil then reduce heat and simmer for about 30 minutes while you prep the marmalade ingredients.

2. Once the concoction has reduced by at least half (more than half is fine), strain it through a sieve into a glass measuring container. Measure out 1 cup of liquid pectin to add to the simmering mandarins later.

1. Rinse, scrub, and quarter the mandarins. Remove any seeds and toss those seeds into the simmering pectin mixture. In two or three batches, add mandarin quarters to a food processor and pulse until just shredded but not mushy, about 8 to 10 pulses.

2. Transfer shredded mandarins to a heavy-bottomed saucepan. Add 1 cup homemade pectin plus another 2 cups water. Bring the mixture to a boil. Meanwhile, place mulling spices or chai spices in a muslin bag and tie the bag shut. (Or wrap spices in cheesecloth and secure with kitchen twine to make a small bundle.) Drop the spice bundle into the boiling mandarins. Reduce heat and simmer for about 30 minutes, or until the biggest piece of mandarin rind is soft when you put a fork through it.

3. Remove the bag of spices and stir in sugar, lemon juice, and vanilla bean seeds. Cook over medium heat, stirring constantly, until the sugar dissolves. Bring the mixture to a boil and cook at a boil for 30 to 45 minutes or longer until the setting point is reached.

4. Setting point tips: Visually what you’re looking for is for the entire mixture to go from a fast boil with lots of frothing to a slow, sluggish plopping of the bubbles with no froth. This is when you know the mixture is thickening. When it’s ready, you should be able to scrape a spoon through the mixture and see the bottom of the pan before the marmalade comes back together. If it’s still watery, keep simmering. I’ve made this recipe many times and the time to reach setting point varies, I think because of the variety of mandarin. Using the homemade pectin method, however, I’ve been able to consistently reach setting point within 30 to 45 minutes. Without the pectin, I’ve had it take up to two hours for the marmalade to set.

5. Once setting point is reached, remove the saucepan from the heat and stir in the liquor you decided to use. Ladle the marmalade into sterilized canning jars, leaving 1/4-inch headspace (the unfilled space between the marmalade and the jar’s lid), and gently seal with a two-part canning lid with band. Using tongs, carefully lower the jars into a large pot of boiling water. Make sure the jars don’t touch and that the water covers the jars by at least an inch. Leave the jars in the boiling water for 5 minutes, then remove and let cool. You should hear a popping sound as each jar seals.

6. Once cool, make sure each jar sealed by pressing your finger on the top of the lid; you shouldn’t feel any movement. Refrigerate any jars that did not seal properly. Label the rest and store them in the cupboard…or give them away as gifts! The preserved marmalade should be enjoyed within 9 months.